Using a panel dataset of cities and municipalities in the Philippines in 2001, 2004, and 2007, the study presented in this chapter investigated whether a local government’s expenditures or revenues from local sources are influenced by the fiscal behavior of its neighboring localities, controlling for the mayor’s term limit status. The results did not find effects of yardstick competition on local governments’ total fiscal spending (net of general public services). In localities with incumbent mayors who are eligible for another term (or belong to political dynasties), the effect of yardstick competition is positive on the provision of social and economic services. However, its effect is negative on local revenues, which suggests other forms of local government interactions are at play. The results support a policy promoting greater access to information to promote overall performance, and also caution about the limited impact of such policy in areas where incumbents are in their last term. 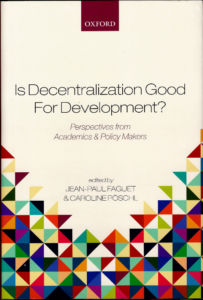